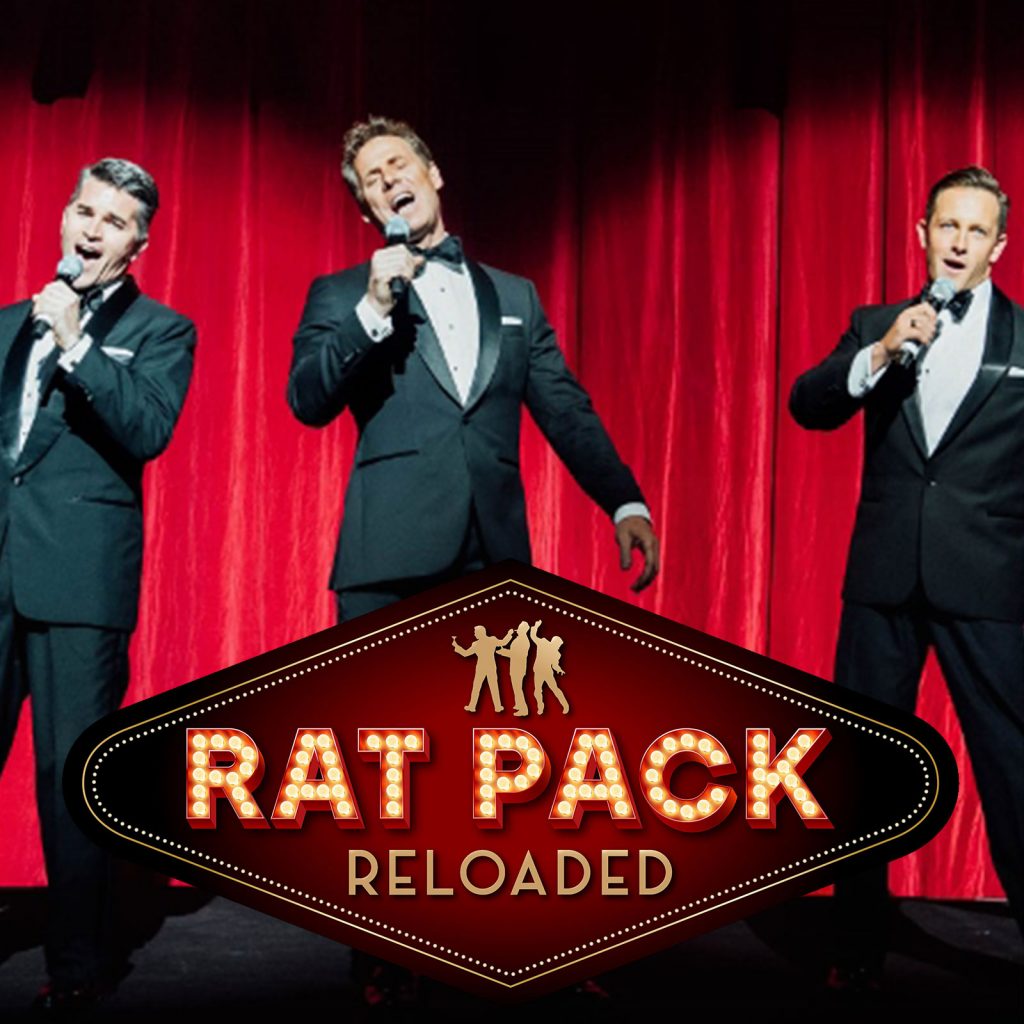 Recreating the sound of the BIG BAND ERA this dazzling show features iconic hits from the 50s right through to today such as New York, New York, My Way, Feeling Good, It Had Better Be Tonight, Sway, That’s Amore and Fly Me to the Moon.

RAT PACK RELOADED stars three of the entertainment industry’s most accomplished and sophisticated leading men who have starred in music theatre, television, and film right across the globe.

Accompanied by their very own live band, Rat Pack Reloaded is one of the most entertaining, audience interactive and versatile shows in town.

DAVID MALEK has an international career in film, television and theatre performing throughout the UK, North America, Asia and Australia originating some of the biggest roles in musical theatre.  From over 500 performances on the West End in Andrew Lloyd Webber’s Aspects of Love to lead roles in Les Miserables, Cats and Phantom of the Opera in the UK and Canada.  David also performed and recorded with Sarah Brightman, starred alongside Dawn French in the London production of Side by Side by Sondheim and appeared in films ‘Sing’ and ‘Kiss Me Kate’ and performed with the Canadian Opera Company with the legend Joan Sutherland.

MARTIN CREWES graduated in 1990 from the West Australian Academy of Performing Arts with a BA in Musical Theatre and is currently one of Australia’s most in demand multi-talented actos and music performers.  Martin’s Australian theatre credits include:  Barnum, The Wizard of Oz, Aspects of Love, Joseph & His Amazing Technicolor Dreamcoat, Westside Story, South Pacific, Chess, Guys and Dolls, Les Miserables, Oh What a Night, Hair, The Man From Snowy River ‘arena spectacular’, Dr Zhivago and the award winning Hayes Theatre production of Sweet Charity to name just a few.  Martin’s UK theatre credits include:  Les Miserables, The Woman In White, The Rink, Pal Joey, Romeo & Juliet and The Sound of Music.  Martin is also well known in the UK where he spent two years in the hit TV series ‘Dream Team’ as well as the mini-series ‘Daylight Robbery’ and was also cast in the original film of ‘Resident Evil’ starring Milla Jovovic.

ZOY FRANGOS: Zoy made his professional opera debut as Jimmy in the world premiere of Deborah Cheetham’s Indigenous Opera Pecan Summer. On graduation, Zoy was cast as Halloran in the world premiere of An Officer and a Gentleman understudying the roles of Zack and Guiterrez. He originated the role of Michael McKeeg in Margaret Fulton – Queen of the Dessert. He made his Sydney Opera House debut in South Pacific understudying Lt Cable. He followed with a highly acclaimed performance as Dr Fine/Dr Madden in Next to Normal. Zoy toured nationally in the 25th Anniversary of Les Miserables playing the role of Feuilly and understudying the roles of Jean Valjean and Enjolras. Following on he co-directed and starred in Dogfight as Boland, Harry in the Charles Kingsford Smith Musical – Workshop, My Fair Lady, Freddy, Taxithi II Metanastes, Palawa Voice in the ground breaking opera Tasmanian Requiem, Evita, Aeneas and the iconic role of Judas in Jesus Christ Superstar. He was awarded the ‘International 2019 American Australian Rising Star Award’, presented in NYC among fellow