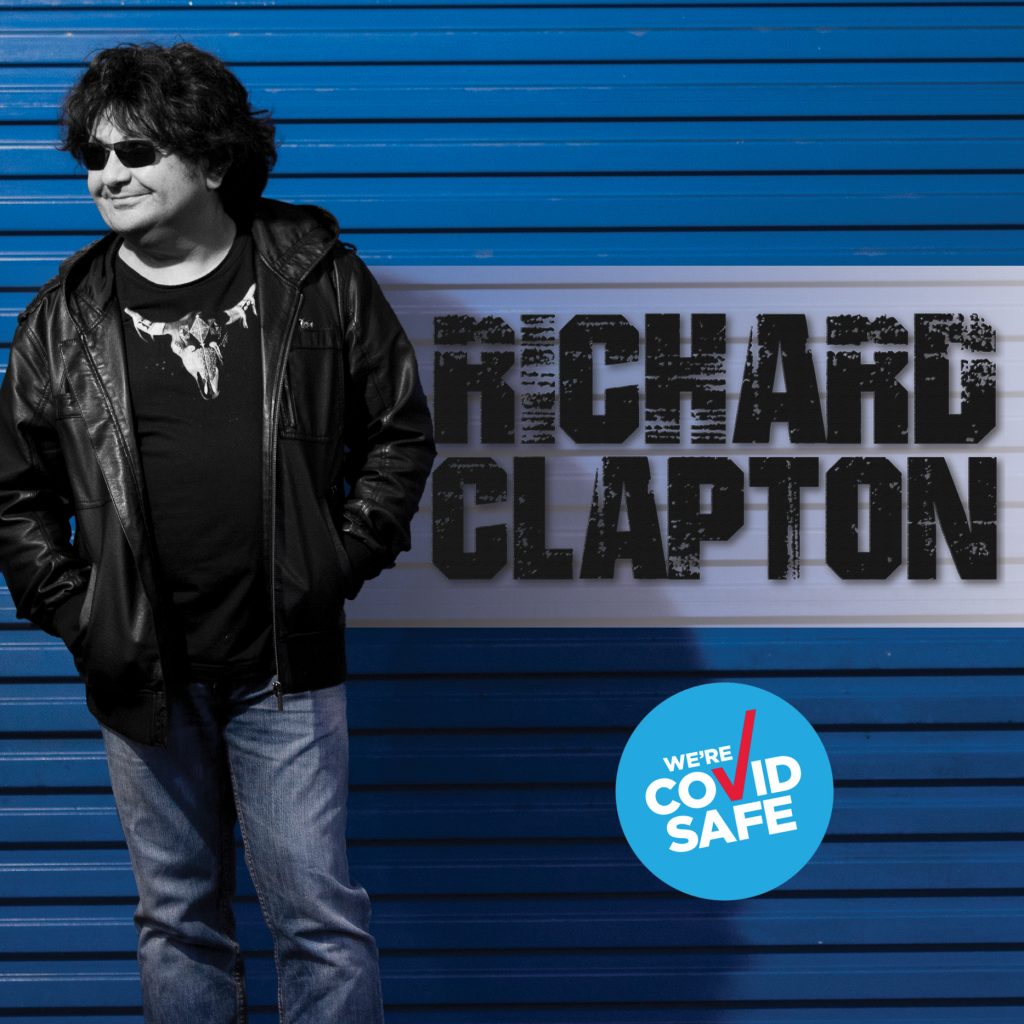 Richard Clapton is one of Australia’s foremost singer/songwriters and paved the way for three generations of songwriters to write about the experience of being Australian.

When Richard Clapton began his recording career in 1974, Australia was still in the vice-like grip of the cultural cringe. He plunged into the “deep water” and legends like Skyhooks and Paul Kelly, Cold Chisel, INXS, Midnight Oil, and hundreds of others, followed in his wake.

Clapton’s songs are still omnipresent on the radio to this day, his records charting the political landscape of the nation and the turbulent lives of two generations.

Clapton grew up in Sydney in the 1960s before hopping a plane for London, and then later to Germany, where he wrote a first album, Prussian Blue (1973) which was one of the first major Australian “singer-songwriter” albums.

Fast track to 1975, Clapton had the critics on side but his label at the time, Festival Records, insisted on a hit single. However, it was the song they picked as a B-side called “Girls On the Avenue” that reached #1 on the national charts and put Clapton at the top of his class. Like Americans Jackson Browne and Bruce Springsteen, Richard Clapton developed a sound based on melodic rock while his lyrics were poetic musings on his state of mind or the state of the nation.

By 1975, Clapton had set the themes he was to explore for the coming three decades. There were frequent escapes to his spiritual second home in Berlin to recharge and get a fresh perspective on Australia; there was Clapton’s love/hate relationship with the pop music culture; his often-tormented sense of growing up and his eye for the political landscape and how it affected Australians.

Clapton mastered that most difficult of show business acts – the highwire that requires the balance of radio-friendly tunes and candid, from-the-heart, lyrics.

These two dichotomies came together on the Goodbye Tiger album which was, at that time, Clapton’s most successful to date. The record was a new highpoint and there was significant international interest in Richard as a recording artist. A period living overseas in Los Angeles brought forth the sophisticated Hearts on the Nightline album (1979).

Then back in Australia in 1980 he released the searing Dark Spaces, an indictment on the meanness and mendacity that would blow through the 1980s.  Ten years after his first release, Richard Clapton was a tribal elder to whom younger artists like Jimmy Barnes, INXS and Cold Chisel turned as a mentor.

INXS asked Clapton to produce their second album, Underneath the Colours, and they became firm friends. They, and Cold Chisel, returned the favour on Clapton’s The Great Escape album with INXS drummer Jon Farriss going on to produce The Glory Road album.  Few records of that time captured the roller coaster ride of the late 1980s as well as Glory Road.

These albums brought Clapton’s melodic gifts and his love of electric rock & roll into lockstep.

There were always the words though – no one better documented the 1980s than Richard Clapton. Richard frequently went to the edge — emotionally, politically, financially — and sent back his incisive postcards.

In the 1990s Richard continued to write and record and tour and his 1990s songs reflect a hard-won maturity. Indeed, Richard counts 2003’s Diamond Mine as amongst his best albums – and the critics unanimously agreed.

In 2005 he set about making the first acoustic album of his career. Clapton stripped back some of his favourite songs – reimagining them in a different environment. The result was his acoustic album – REWIRED. This project was never intended to be a greatest hits record – and indeed many of his greatest hits aren’t here. It was an experiment in hearing Richard Clapton in a new way.

Since his first album in 1974, Richard has shown no signs of slowing down. He has released over 20 albums which have cumulatively sold over one million copies. He is the only rock artist to have received an Australia Council arts grant from the government which enabled him to travel around the world and write the songs for “Goodbye Tiger”.

In 1999 Richard Clapton was inducted into the ARIA Hall of Fame.

In August 2012 Richard released “Harlequin Nights”, which is perhaps his most personal and cathartic album ever. Once again, the album received excellent reviews across the board and showed that Clapton was still at the peak of his powers, showing no signs of slowing down.

In 2014, his first memoir “The Best Years of Our Lives” was published by Allen and Unwin. The book connected with people of all generations because it was not only a story of Clapton’s journey, but it also documented the story of the lives of thousands of fans who had travelled the same road. Young people – fascinated by how it was “back in the day” also became a new generation of fans. The book continues to flourish through “word of mouth”, resonating with so many people in so many ways.

In 2015, Richard travelled to the U.S. to record a new album with acclaimed producer Mark Moffatt.  This had come to fruition after a few years of Moffatt urging Clapton to get over to Nashville and record with the finest musicians available. Moffatt (originally from Queensland) had by this stage been living in Nashville for over twenty years and had become an integral part of Americana Musicfest (held in Nashville every year).

The idea behind the album was to carefully select twelve songs – whether old or new – from Clapton’s vast catalogue, which would fit neatly into the “Americana” genre. The result is an album which many have wanted Clapton to make for a long time. It is simply some of the best songs he has written – old and new – recorded with some of the best musicians in Music City. The album features the legendary Dan Dugmore (longtime guitarist with Linda Ronstadt, James Taylor, Stevie Nicks and so many others), and David La Bruyere from John Mayer’s band, along with a band of Nashville’s finest.

It should be acknowledged that 200 loyal fans raised the funds to finance this project through “crowd-funding” on pledgemusic.com. This new journey has taken Richard to a brave new world where artists no longer have to rely on the corporate teat and can be truly independent. The 200 fans who pledged the money to get Richard to Nashville were entitled to a digital download on Australia Day. So far their reaction has been elation and excitement and they are already encouraging their friends to grab a copy of “The House Of Orange” as soon as the CD hits the streets.

The story behind the album’s title, “The House of Orange”, is a tip of Richard’s hat to the house he rented during his two month stay in Nashville which was owned by Charles Orange who claims lineage back to the Dutch Royal Court – the original House of Orange. (Robert Hunter from the Grateful Dead, Brian Setzer from Stray Cats and Nickelback are some of the rock luminaries who have also stayed in the Orange house.)

Richard Clapton has never been rich. He has never had the pleasure of passing through life in a luxurious rock star bubble. In a career that now spans over 40 years he has battled everything from bad managers and capricious record companies to debt, taxes, personal tragedy and a thousand room service dinners. The fact that he’s come through it all with his sanity intact surprises all who know and love him.

But survive he has, with a tale to tell.

“Every nation with a great tradition in rock whose longevity places them in a special, sparsely populated strata of the entertainment world. They are the tribal elders of popular music, you might say. If America has Jackson Browne and Bruce Springsteen, and the U.K. has Van Morrison and Paul McCartney, then we are proud to confer similar prestige on Richard Clapton. Songs like “Deep Water” and “Capricorn Dancer” are touchstones on the Aussie rock landscape, without which we wouldn’t really know who we are or where we’re going.”