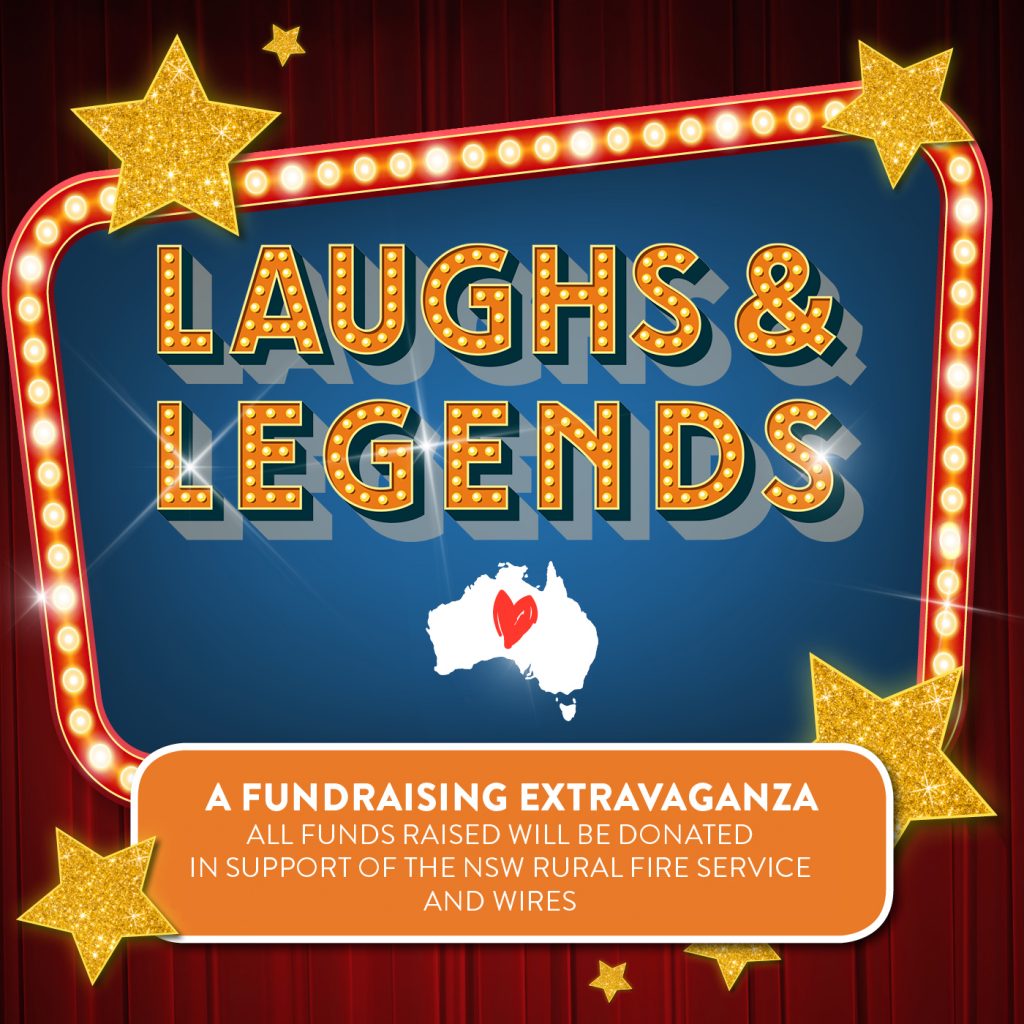 These World Class Australian Entertainers are coming together to raise much needed funds in support of The NSW Rural Fire Service and WIRES.

The NSW Rural Fire Service (NSW RFS) is the world’s largest volunteer fire service. Our members provide fire and emergency services to approximately 95 percent of NSW. NSW RFS members attend a range of incidents and activities. Our Aim is to provide a world standard of excellence in the provision of a community-based fire and emergency service. To protect the community and our environment we will minimise the impact of fire and other emergencies by providing the highest standards of training, community education, prevention and operational capability. Donations made to the NSW Rural Fire Service (NSW RFS), directly benefit volunteer firefighters and are always gratefully received.

It is impossible to estimate the number of native animals that have perished or how many more will be lost in the fires, or to predict the impact that dire food and water shortages, as well as habitat loss caused by the fires and drought, will have on wild populations. WIRES receives 600-1000 calls a day from the community needing wildlife rescue advice and assistance for sick, injured and orphaned animals. This summer there is the additional stress of the emergency events and surviving animals will be struggling long-term with dire food and water shortages and loss of habitat.

Vince Sorrenti is one of Australia’s most successful and popular comics. For the past 2 decades he has been the entertainer of choice at the nation’s leading corporate, benefit, sporting, political, conference, and social events. His excellence and experience on stage see him hosting and speaking at over 200 events per year.

Dean Bourne started performing at the ripe old age of 10 and by the time he had reached 15, he had conquered the local club, pub and restaurant circuits. Even at this early age, it was evident that Dean had a special gift, not only for playing the guitar but for his extraordinary vocal ability. Dean has performed to sell-out crowds around the world

From Australian Idol Season 2, Belinda Adams powerful soulful singing style combined with a gusto performance takes her audience through all styles of song – versatility is Belinda’s trademark. Easily recognised as one of Sydney’s live music scene’s most talented singers, Belinda has been performing as a solo artist for over 20 years around Australia and across the globe with various sized bands from a duo to a 30 piece big band!

One of Sydney’s best comedy entertainers, Greg originally hails from Perth, where his uncanny impressions of sporting personalities and politician led to regular guest appearances on television and radio. After moving to Sydney he was soon busy, performing at clubs, theatre restaurants, corporate functions, on cruise ships and other venues. A celebrated interview with Alan Jones on 2GB, Sydney was a classic, with Greg impersonating the then Prime Minister Paul Keating, causing quite a stir with listeners. Since then, Greg has gone onto perfecting the Alan Jones style and voice.

Darren is recognized throughout the industry as Australia’s Number One Ventriloquist, performing with his cast of hilarious characters, at hundreds of corporate functions, special events, nightclubs and theaters worldwide. Darren has been honored with over two dozen “ACE” and “MO” Entertainment Awards as “Specialty Performer of the Year” and “Australian Performer of the Year”. In 2013 he reached the finals of “Australia’s Got Talent” on the Nine network and the YouTube videos of these performances have had over 6 million views. He has also twice accepted invitations to appear as a headliner at the International Ventriloquist Convention in the USA.

With a father (Pat Jarvis) who represented Australia in Rugby League, one would expect Jackson to pursue a life of sport, but destiny had a different path in store for him. At the age of twelve, Jackson found his calling when his mother bought him a magic deck of cards for his birthday. Having spent countless hours as a child playing cards with his mother by her hospital bedside, Jackson had always found comfort in the feel, sound and scent of a deck of cards. Before graduating high school Jackson had mastered techniques in card magic that few magicians anywhere in the world could perform, He has since gone on to earn a spot as resident magician at The Star casino (3 years), as well as appearances on Disney, Sydney Weekender, Today, SBS, China Central TV, TV5MONDE (France) and Channel 7’s Morning Show where has was called “Best in the biz.” Jackson’s talents have gained half a billion views online and over 2.5 million followers on social media. Prepare to be blown away by one of Australia’s best illusionists!

For 25 years Rod has been there, The Imitable Style! The Voice! The Hair! Morgan Kent’s portrayal of Rod Stewart has not only won the respect of his audiences, he has also won the respect of the industry. Morgan’s own brand of outrageous impressions of a great many stars including Elvis, Roy Orbison, John Lennon, Rod Stewart, The Bee Gee’s, Joe Cocker and Pavarotti make him a truly Great Showman offering entertainment at it’s best!!

Bobby is an award winning compere, comedian & tribute performer with over 40 years experience. Bobby has been entertaining all audiences including corporate, theatre, club and cruise.