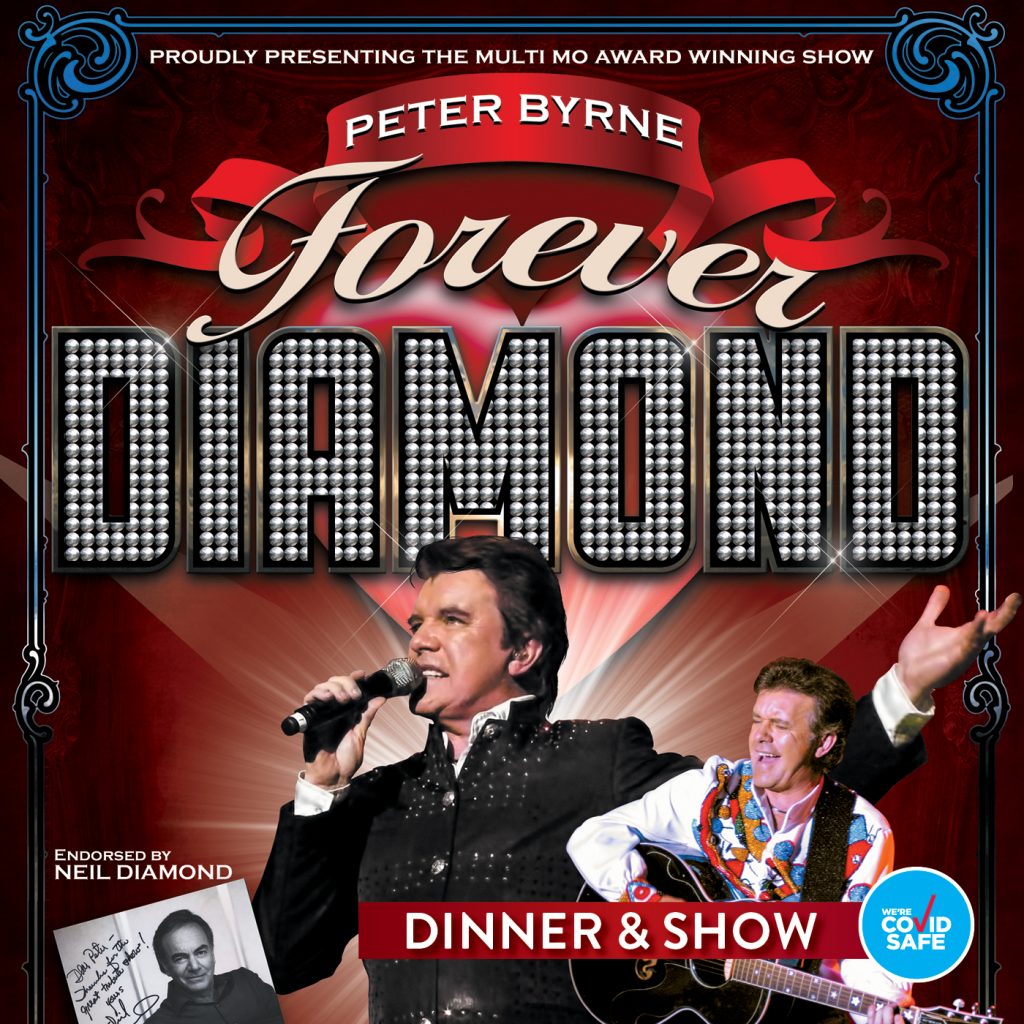 We are excited to re-ignite Live Music in a Covid-Safe environment with the truly legendary Peter Byrne in his Forever Diamond show.

Neil Diamond is a phenomenon who gives truly special and personal shows that legions of fans return to see again and again. A style that transcends music fads by consistently touching people of all ages and interests.

The personal and magical interaction Diamond has on stage with an audience is legendary, breaking all box office records wherever he performs.Now here is your opportunity to experience that same spontaneous display of energy and sensuality with the superb talents of Peter Byrne and Forever Diamond,a show performing Diamonds greatest hits spanning over three decades, in an uncanny portrayal that has to be seen to be believed.Peter Byrne’s capacity to recreate Neil Diamond to a standard which impressed Diamond’s pianist on his last Australian tour says it all.

Tom Hensley gave Peter a resounding nod of approval after seeing his Diamond tribute. The highlight no doubt was in 2003 when Peter won his third ‘MO” award and his idol found out …Irishman Byrne’s singing voice is eerie in its likeness to the megastar and providing the impetus for Byrne’s performance is a relentless pursuit to raise his Diamond act to a level that the man himself would endorse.

Peter’s career highlights are too many to mention, but the ones that stick in his mind was meeting his idol, Neil Diamond in 1996.In August 1997he celebrated the 25thanniversary of one of the greatest live albums of the 70’s Hot August Night, His idea was to re-enact every song from the album as Diamond recorded (with 30 piece symphony orchestra), and he did just that; and over 5,000 people were taken on a trip down memory lane.

“It remains to be seen if Byrne, once reaches perfection strives to out-do his idol, however, the day I see a better Diamond, will be the day the man himself appears on stage…

Click here to view the menu (Note: The Booker will be contacted the week prior to the event to find out any dietary requirements)